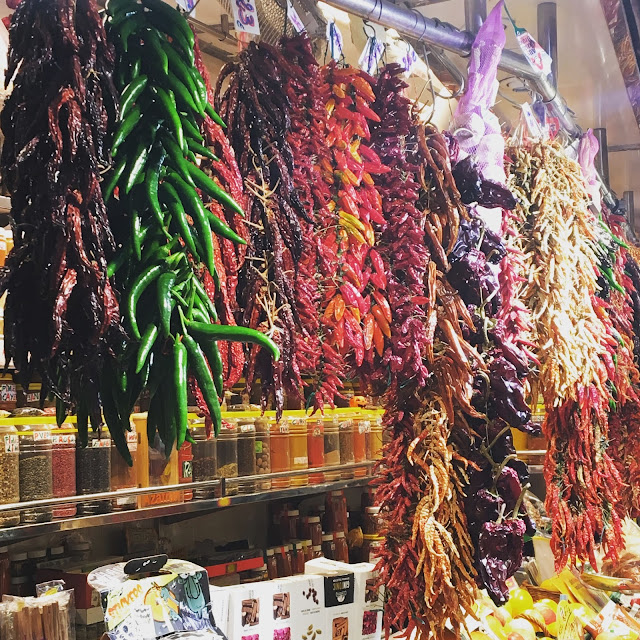 Travelling when vegetarian or vegan can be tricky – and I’m not even talking about real travelling. A week in another European country can be difficult enough. We Brits, in general, are pretty embarrassingly useless at languages so rely on the intelligence and kindness of strangers abroad to know what we mean. Add that to cultural differences and, as a veggie or vegan, you may be in for a bumpy ride.

You will have figured out by now, through this blog or simply through the above paragraph (nothing gets by you) that I am a vegetarian turned vegan.  Last week I had the enormous pleasure of travelling to Barcelona with my family and partner for one last fling with Summer before the cold weather really sets in. Myself and my sister were raised vegetarian. My Mum has been vegetarian since the age of 16 and is now vegan. My Dad has been vegetarian since marrying my Mum. My brother in law and partner are vegetarian. The six of us expected to spend the week gazing nervously at menus and opting for safe options of bread and salad. We travel together a lot and usually choose to buy food at a local supermarket to cook and eat in our apartment after a long day of exploring. We love this, but in Barcelona we were more able to engage with the local food scene than we have ever before because, guys, Barcelona gets it. 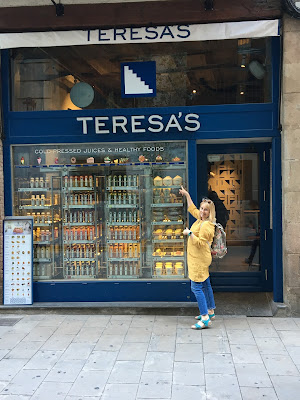 We kept coming across vegetarian and vegan restaurants, cafes and shops. Standard restaurants had vegan and vegetarian options and everywhere had beautiful fresh produce. We had more choice than we have ever had as a vegetarian travelling group in any other European city. The above picture shows Teresa’s, a health food shop with fresh juices, vegan treats and meals. It’s pricey but the window was packed with beautiful looking things. 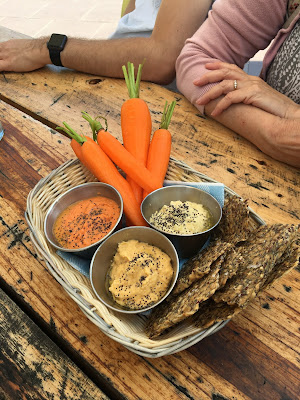 In Barcelonetta we sat down for a drink at a place called ‘Makamaka’ where my sister ended up having “the best drink of my life” and my Mum and I had a vegan snack of homemade seed crackers, a trio of hummus and carrots. Simple, amazing vegan food. Plus you get to sit here: 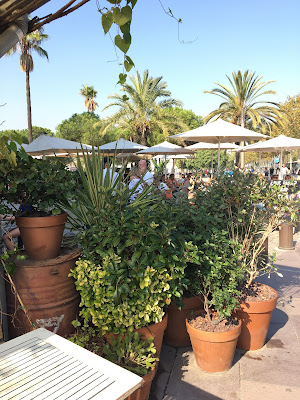 When we were in Amsterdam we found a vegetarian fast food chain called Maoz which sells falafel pitas with help-yourself salad and trimmings, alongside the best chips. We found another in Barcelona and that was one lunch sorted. 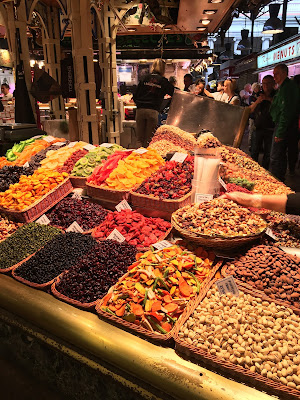 The market, La Boqueria, was a feast for foodie eyes. Veggies beware of the numerous stalls for fresh meat and fish – you might want to hot tail it through that bit. However, there are also numerous stalls with fresh fruits, juices, spices, dried goods and breads to gaze at. Plus, on the periphery were one vegetarian food stall selling wraps and burritos and one vegan place with some of the best falafel I have ever had and THE best tahini dressing. My Dad bought one, we all tried it, everybody bought one. The guy behind the stall was hilarious :”one won’t be enough”, he warned us.

We were excited to find a restaurant called Vegetalia which has three premises within Barcelona. The whole menu is vegetarian and has vegan options. Not a stuffed pepper in sight. We had pizzas, paella, seitan, curry, burgers and vegetable crisps. The decor could do with an update as it certainly has a hippy 70s vibe (including wicker baskets on the walls) but it had its quirks  – in one of the restaurants the sink is a bucket with a plug in the bottom! The food was cheap and the staff were lovely.

Veggies of Europe – eat there. 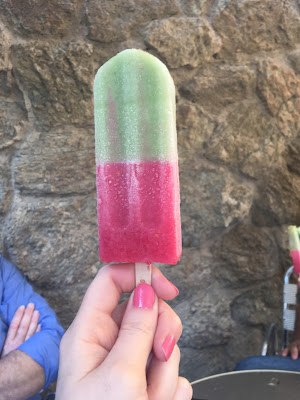 Seeing as we were flirting with the last of Summer it would be foolish not to partake of a little ice cream. Most of the ice cream places had a selection of 100% fruit, vegan lollies. The above lolly was apple and raspberry, eaten in Park Guell.

Almost every morning, my sister, mum and I would wander around the corner from our apartment in Sant Antoni to a little bakery called Macxipan where a wonderful woman helped us through our clumsy order for pastries. The best was a cone shaped pastry covered in a thick, crisp layer of dark chocolate. She would help us choose the one with the most chocolate: “Aqui? or aqui!?” I’ve never felt less silly for trying to speak a language of which I know none. 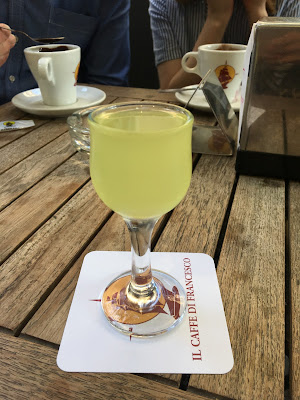 Of course where there is food, there must be drink. Sangria and Mojitos were the theme of the week with a little limoncello and a lot of coffees for the guys. An amazing bar tender in a bar in Sant Antoni told us there was no menu, she could make whatever we wanted… 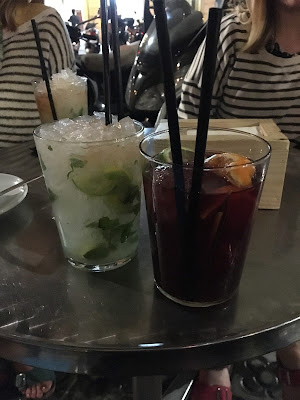 and whatever we wanted seemed to be the theme of food in Barcelona. 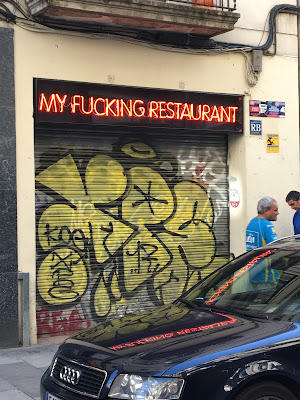 How do you other veggies and vegans find travelling around Europe? What are the best cities for v friendly eating? And, most importantly, how can I make that sangria at home?

Getting Back into Yoga